In 2019, HÖRMANN Kommunikation & Netze carried out modernisation work on two 110-kilovolt cables in the Frankenthal area on behalf of Pfalzwerke Netz AG. The company’s work to replace pylons and conductors met with glowing feedback. As a result, it was invited in late 2019 to submit a tender for further projects in 2020, to be divided into three lots. HÖRMANN Kommunikation & Netze was given the contract for lot 2, with the range of services involved increasing considerably following initial talks.

The 110 kV cable project designated ‘SW Miesau – UW Bruchhof’ included replacing the phase conductors and upgrading them to bundles of two (that is, two conductors per phase) and replacing a fibre-optic earth wire, meaning a data cable doubling as a means of lightning protection. The route involved was around 11.3 km long and featured 47 pylons.

Two things in particular made the project special.

Strenuous efforts had to be made during the work to protect nearby buildings, roads and railway lines against any risk of the conductors falling down. Around 230 roller hangers were used for this. An additional retaining cable with track rollers was inserted into the existing conductor and used for safe conductor replacement.

There were 12 to 20 employees on-site throughout the duration of the work, running from May to the end of September 2019. Preparations are already under way for another stringing operation near Mutterstadt and a pylon replacement project at the Mercedes-Benz proving grounds for our customer Pfalzwerke Netz AG. 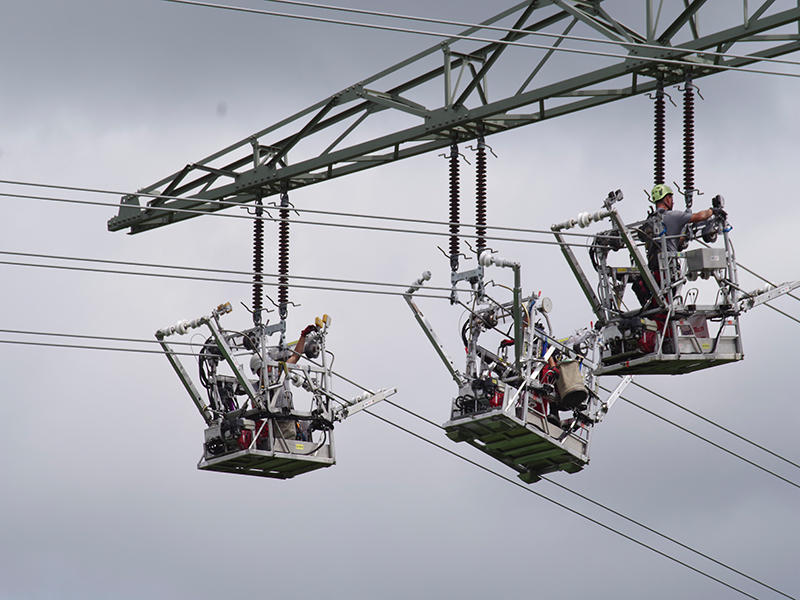