HÖRMANN Vehicle Engineering GmbH, a HÖRMANN Group company, presented an innovative carrying wagon concept for the rolling highway at the TRAKO conference in the Polish city of Gdansk. TRAKO is the largest rail vehicle exhibition fair after InnoTrans and focuses on Eastern Europe. Exhibitors showcase modern transport systems and major future investments in the sector. “Using the example of a virtual tram that people can board using VR glasses and a scale-model of an articulated train for the rolling highway, we demonstrated the range of our overall vehicle expertise when it comes to transporting people and goods,” said Stephan Gruss, project manager for RAMS at HÖRMANN Vehicle Engineering. Frank Salzwedel, managing director of HÖRMANN Vehicle Engineering, added: “In meetings with customers, we developed more ideas for new projects with our service portfolio.”

RAlpin commissioned HÖRMANN Vehicle Engineering to develop an innovative low-floor wagon for transporting trucks on rail tracks – an articulated train concept for the rolling highway. The rolling highway is a transport system for accompanied, combined transport by rail, comprising a special train that transports the entire truck. This gives drivers time to take a break when going through Switzerland on their way from Germany to Italy and, in future, will provide an opportunity to charge electric trucks during transport.

The new articulated train concept is a system in which articulated trucks are positioned across wagons at a minimum distance of 0.3 metres. The articulated train is made up of several modules, known as the workshop unit. The modules comprise various short vehicle bodies that are connected to each other by joints and are supported by these joints on the bogies. The innovative element of this is that it makes it possible to transport four additional articulated trucks in comparison to the existing rolling highway vehicles, all while maintaining the same train length. “This way of transporting trucks across multiple carrying wagons also means that far larger and heavier vehicles can be transported,” said Frank Salzwedel, referring to large vehicles with a length of around 25 metres.

In addition to the articulated train concept, HÖRMANN Vehicle Engineering employees also presented a tram concept with the help of VR glasses at the exhibition fair. In cooperation with the professorship of ergonomics and innovation management at TU Chemnitz, visitors could immerse themselves in the virtual world of a tram prototype. Not only does this create a fascinating experience that enhances the power of the imagination, it also makes it easier to decide on formal design variations and saves on the costs of elaborately designed demonstrations.

The virtual model is used in the development process to make user-related improvements, for example by considering ergonomics and usability studies or acceptance and design evaluations. “Employees and customers are equally impressed by our VR glasses and they were the highlight of the exhibition stand,” commented Stephan Gruss. 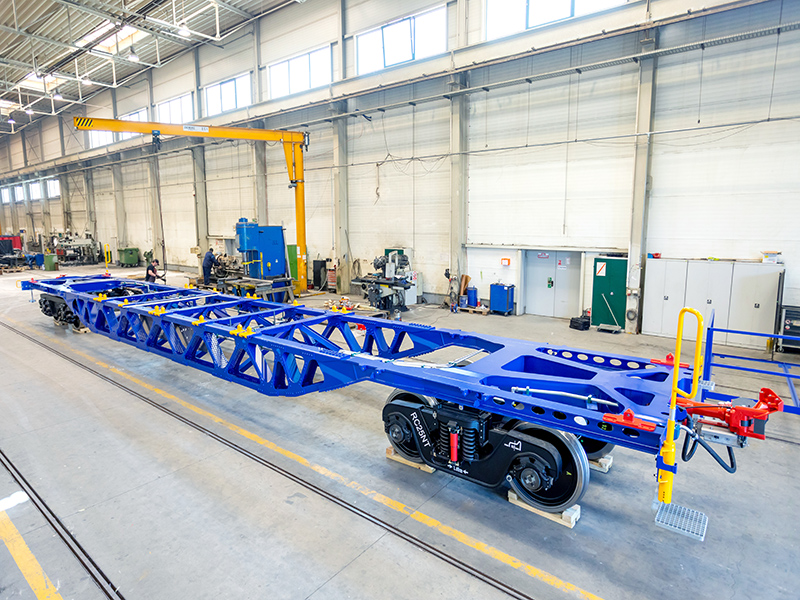